It’s no surprise that with all of the information that we now have access to, sometimes your voice gets lost among the rabble, even if you have something really great and inspiring and insightful to say. But the problem isn’t what you say — it’s how you say it. And a soapbox to stand on is not going to cut it.

Even with all of our advanced technology and our amazing ability to comprehend complex concepts and read/write dense, esoteric text, nothing speaks to us quite like visual content. Why? Well, the benefits are many — so let me show you.

This point is key. Everything is fast. People are more impatient and rushed now than they’ve ever been. You have to be able to make them stop. The human brain processes images much, much faster than it does text — up to 36,000 images per minute! And the majority of the information that our brain receives (80 to 90 percent) comes through those two eyes of yours. In fact, 60 percent of people learn primarily through visual processing alone.

Most people only remember approximately 30 percent of what they read. Yet our eye is naturally drawn to visual content because they are not only aesthetically pleasing, but they also make information easier to understand. And when something is easier to understand, it is easier to remember. There’s a reason we use adorable pictures of farm animals and picture books to give children a crash course on the world. Pictures also have ample opportunity to provide a quick punchline and, as you’re more than aware, funny tends to pretty memorable. Case in point: people who can recite an entire funny movie or memes that are brought to the surface over and over again.

It seems that, more than any other media, we are much more likely to share visual content via social media than we are articles. Videos, memes, infographics; these all have the tendency to go viral on the Internet. And because people share images more (through platforms such as Pinterest, Instagram and YouTube) the pictures they share are better gateways to the content or website where they were created. Which is exactly why more and more businesses are relying on more visually-based social media to market themselves. And it’s why you should too.

Fast fact: Behind Facebook, Instagram has the highest rate of engagement/time spent by visitors on the site or app; approximately 12 billion minutes of time as of last December. Just imagine what it’s at now!

Even a small picture will stand out among a block of text. Not only will we just see a picture better, but it actually provides a little relief for our eye, whereas text can be very straining on our eyes. It’s why newspapers went from this to this. And why choosing font/background colors can be a delicate and finicky process. If the colors clash even the tiniest bit, you can concuss your readers. Not really. But you can give them a bad headache and, chances are, they will bounce off of your page in seconds.

One the best benefits of pictures is that they are evergreen, meaning, you don’t have to go back and touch up a photo to make it more relevant (like I will probably have to do with this article eventually). It doesn’t become dated because, no matter how long ago the picture was created or taken, it is an encapsulation of that time and that is one the best things about photos in general.* That’s kind of the reason people became fascinated with photographs in the first place. (*Not really including infographics in this example, since the chosen data can become outdated.)

We are, historically, a storytelling culture. The way the first human species chose to communicate? Why, with pretty pictures of course. From cave paintings to egyptian hieroglyphics to wedge-shaped cuneiform (basically a picture “shorthand”) to the language we use today — pictures begat words and language. And we still hold great stock in images to this day. They speak to us instantly and they typically transcend language barriers. It’s how we show each other what the rest of the world looks like. Admit it, you would have no idea what Everest or a white tiger or Sasquatch would look like if it weren’t for pictures—most likely.

We’re all suckers for great stories, it’s in our blood, so it’s no wonder that our minds automatically try to decipher the meaning behind pictures. So whether it’s for social media or a blog post or what have you, make sure you utilize the world’s oldest form of communication! Even with all of our highfalutin’, fancy technology, visual content remains a tried-and-true agent of storytelling. 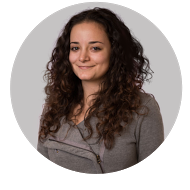 Emmalee Zupo is a Content Marketing Specialist at Inspire, with a background (and her Bachelor’s) in journalism. After years of living in the mountains, she opted for the salty air of Wilmington, NC. She’s a fan. And now she’s tan. (And a poet.) When she’s not wading through words and content, she can be found digesting books and trying to decide which of her rotating hobbies to pursue. The dilemma often causes her to nap. Also, she has dogs, whom she’ll work into the conversation whenever possible.